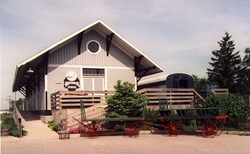 Garrett was - and is - a railroad town! Founded in 1875 by the Baltimore and Ohio Railroad, it was named after John Garrett, President of the B&O. A major point on the Chicago Division of the B&O, Garrett was at one time the home for car shops, a large roundhouse and engine facility, and was the main passenger station between Willard, Ohio, and Chicago. Today the City of Garrett has a population of 5,000 and is in north-east Indiana, 17 miles north of Fort Wayne on State Road 327. Garrett can be easily found by taking the Auburn exit from I-69 - head approximately 5 miles west on highway 8 to State Road 327. Turn left (south) on 327 - we're about 1 mile down the road.

The Garrett Historical Society Museum is the former Baltimore and Ohio Railroad freight station. Located along side the CSX Railroad tracks, the station has been restored to reflect a typical  rural railroad station of the early 1900's. Here you will find displayed many relics, curios, photographs, and railroad items that tell the story of Garrett's rich history. The basement of the museum is home of the Garrett Model Railroad Club (GMRC), an HO scale model railroad layout. Outside is a passenger car and a former Chesapeake and Ohio caboose. Other items displayed include the crossing tower which guarded Randolph Street for many years.

If you are passing through the area, take time to stop by and visit! If you have a school group that would like a tour, give us a call and we can arrange to open the museum for you. The museum is usually open weekends Memorial Day through October from 1:00 PM to 4:00 PM, other times by appointment. Please call ahead for hours because the museum is staffed by volunteers.